Last year I went into the race after a campaign of good training, good eating and a perfectly honed race plan in place. Of course the race went tits up. Too much pressure on my self, it was always destined to go wrong. This year I thought I would not stress so much about everything, ate a less than perfect diet, put on a few pounds and generally had a much more relaxed approach to the race. I had a very loose plan A that was to be, run the first half in 8 hours and see how I felt. Possibly pushing forward for a pb attempt if I felt good. If anything was not going right I was going to back off as I've got the Dragons Back race at the end of June and I didn't want to jeopardise that. Having said that this race was special to me not only because it's my WS qualifier but it was to be my 11th attempt at a Centurion 100 having DNF'd 1 this would be my 10th finishers buckle.


I arrived a touch early for registration so headed for McDonalds for a pre race porridge and bumped into Rich Cranswick who had beaten me to it and was feasting on a sausage muffin. We chatted for a while before heading off to get signed in. Its always a good idea to get in early, I hate queuing for anything so I'd rather be early and then have to kill time. I had a good chat to James before I registered then had a natter with all the familiar faces around the registration room. I headed back to the car and got ready. I found a couple of other Spartathlon entrants and introduced myself to them, Paul Corderoy and Ian Thomas, I also had a chat with Martin Pether. Funny how you have all these FB friends and don't actually meet. I try to introduce to myself to as many as I recognise.


We were soon on the start line and the brief had taken place. I found myself right at the front and as per usually I could feel my race plan slipping away. I had had months to think how I would tackle the race and starting at the front wasn't in the program. I'd planned to start in the middle so not to get swept up in an early fast pace but no there I was again right at the front on my toes looking like I'm about to start a park run.


The horn went off and so were we. There were a few in front and I now concentrated on banging out 8min miles which due to some poor mental arithmetic should have been 9min miles. Still it felt good so I stuck with it. I felt really good early on and my thoughts soon went to a potential pb. I ran on and off with Ian and we chatted but I find it quite hard to concentrate on what I'm doing if I spend too much time waffling so the little and often chats suited me fine. Through the first aid station and I felt good.  My wife on usual crew duties told me early that I was going a bit fast but that fell on deaf ears. Today could be a quick one.


I have been experimenting lately with a new powdered nutrition and it has been fantastic but after a couple of bottle refills it started to make me feel sick. Not great. Also I was using the Inov8 race ultra 10 pack for its first major event. It has 2 hydrapack bottles positioned under your armpits and then two straws up to near your mouth. I love the pack and set up but refilling is awkward to say the least especially trying to put a sachet of powder in the bottle then refilling then reattaching to the straws. I used a volunteer at every aid station to help with this. So thanks to all. On the flip side this is not going to be an ideal situation for the Dragons back and I'll have to have a re think on pack choice for that.


Soon out of Wrasbury I realised I couldn't maintain the pace and started to back off. My hamstrings, calves and one of my Achilles were hurting possibly due to being bent over laying turf all week. That and feeling sick certainly knocked me back. I started to enjoy the run more at the slower pace and began trying to get back on track for my 8 hour, 50 mile. Earlier in the day I had lubed my nether regions which is something I wouldn't normally do. I had chaffed my nuts during a training run so decided I needed some preventative measures. This in hindsight seems to have caused me more of a problem and I was getting sore. Perhaps I was having a reaction to the Gurney Goo I'd used? I reached Cookham and was back on track time wise. The running is lovely through to Henley and I had plenty of time to think about the race and how things were going. I could feel a hot spot on my foot and was very aware of a blister coming up on my foot. 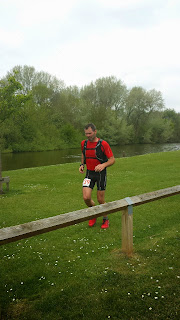 I got to Henley and was greeted by the ever pleasant Karen and her excellent half way aid station. I decided to have a really good stop, so I first removed my sock to reveal a massive big toe blister which wasn't causing too much grief so I decided to leave it be. A change of top, a big bowl of pasta and a bag restock I was ready to go again. I'd reached Henley in 8 hours 11 so pretty much run a perfectly timed first half but the game was up I reassessed my race and made a firm decision that a pb attempt was off. Too much had gone wrong and my legs couldn't run the last half in under 10 hours. I decided it was to be damage limitation. Get the race done, no injuries and recover quickly to resume dragons back training.


I got to Reading and my chaffing was getting intolerable, I got a massive glob of vas and slavered it on but it just seemed to make the pain worse. I likened the pain to having sat on a cactus, it was awful. I had a quick few words with Jacqui and Paul before running on. I soon started running with David Thompson and we stuck together for a good few miles. We were counting down the miles a bit which is not best practice for getting you through but we were steadily run walking and apart from my obvious pain things were ok.


The head torch came out between Reading and Whitchurch as did my base layer it was getting chilly. I got into Whitchurch and my pal Lee was helping out. He had kindly bought me some dairy milk which was a real treat and gave me a real lift. Dave and I left Whitchurch and ran for a while until we reached the only hill on the course which goes down for about 20mtrs then back up the other side, well I managed to slip and fall bending my thumb back in the process. Great.


I had a nice bowl of pasta at Streatley and told my wife to go and wait at the finish as there was nothing more I would need. It had started to rain so the coat went on too and we set off again. Some of the next 20 miles are amongst the dullest night time running you could experience. My chaffing was killing me, it was raining and it was bleak. This truly wasn't enjoyable at all. As I pondered the reasons why I do this and ate a small bag of jelly babies I managed to chomp right into my tongue. For f*ck sake there was blood pouring from my mouth. I put the jellys away and trudged on. Dave had more in his legs during this time and went ahead alone. I was ok though run walking and knew it would see me to the end. I had however forgot my cans of redbull to drink in the night and the sleep demons were pulling on my eyelids. At least twice I dozed off while running, luckily only running into the bushes and not the Thames. Not many people believe it is possible to fall asleep whilst running but I'm sure I'm not the only person this happens too.


The last 10 miles went by painfully, I had stopped applying vas hours previous and the cactus feeling was more like someone had fired staples into my bits. I ran, I walked and occasionally stopped with my legs spread to relieve the pain. I wanted this race done and I soon rounded the last bend onto the home straight. It was done 20hrs 20min. I received my buckle number 10.


I apologise to everyone at the finish who asked if I enjoyed it and got a blunt no, I'm a miserable git at best even if I've had a good race. However I did cheer up slightly after a good layer of Sudacream.


I'm glad I've got my 10th done as that has filled up my wall nicely and on the back of that I don't need to do this race again. I just know when entries open I'll be thinking that this race still has potential for a good time. Could the Thames path and I be finished? I'm not sure. I'm just not sure how to approach it next time to get a great time.