With UTMB looming a good mountain race was in need, and given the MCN crowd do put on a bloody good event, The Black Mountains 40 seemed the obvious choice.


Race day was on a Saturday so I packed up early on Friday, knowing from previous experience that the journey to South Wales on a Friday evening is shite to say the least. I left at 2 and picked my mate Jeff up an hour later. Talgarth here we come.
The journey was as uneventful as ever, the only break from the monotony of the M4 was the absolute shock of the toll price £12.80 for my van! At least it gave me something to moan about for the rest of the journey. Five hours after leaving we arrived in Talgarth and promptly went to Jeff's hotel which was adjoining the local chippy, Classy. I had intended to kip in the back of my van in the car park of the hotel but this must have been the only chip shop for miles and it was heaving so there was no way I was kipping there. I left Jeff there and parked in main town car park and walked back to the hotel so we could eat. The menu in the hotel was straight out of next doors eatery, so chips it was. I had chicken and it was err... fried with chips dripping with fat. It was not pleasant at all, but I needed some fuel for tomorrow so I ate it. I then felt guilty as I've been eating almost perfectly since my last race and this was crap and the night before an event. We chatted for a while and I wondered off about 9ish to get my head down. 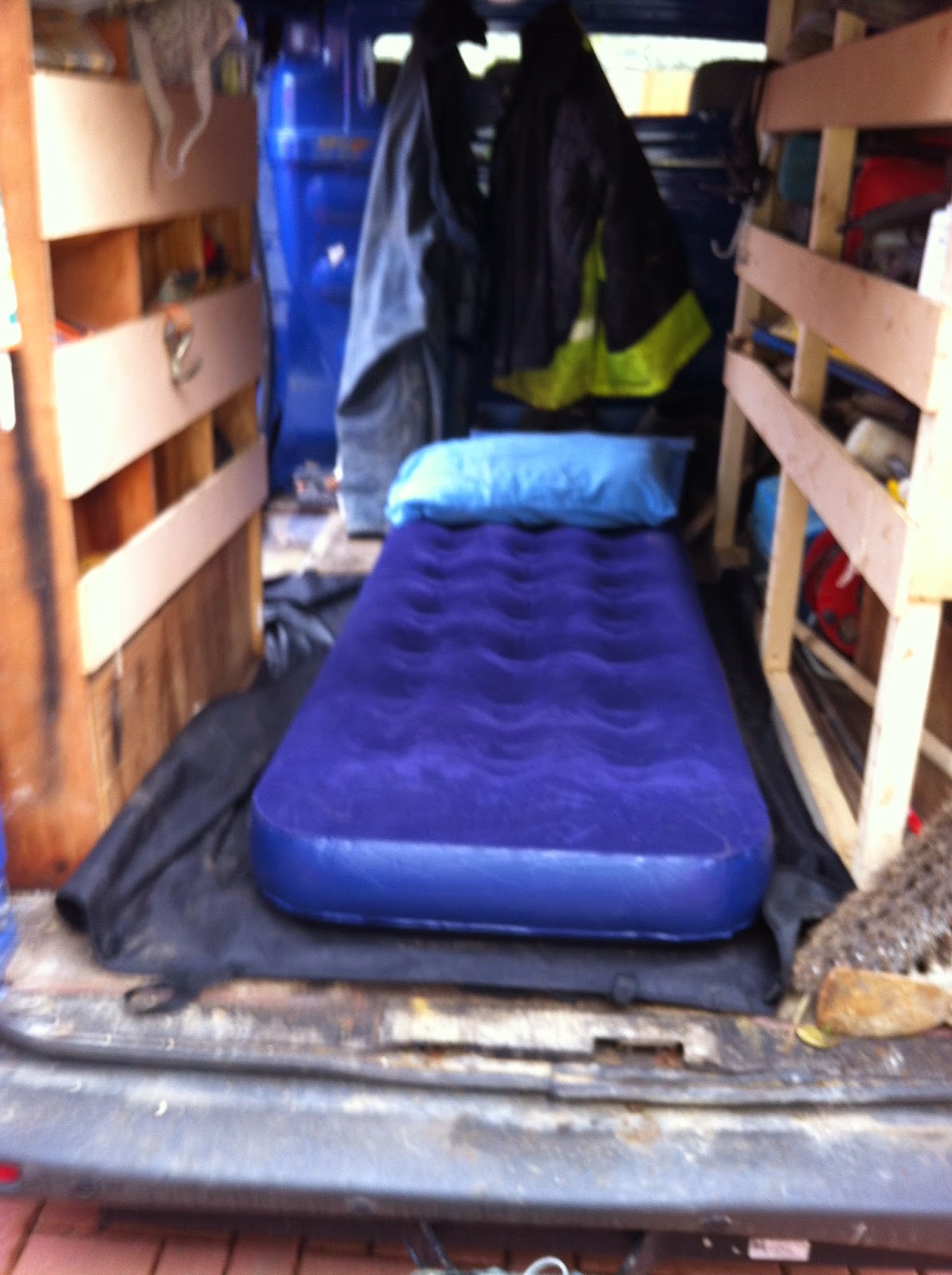 My usual ultra vehicle is my T4 camper but it is becoming expensive to run a car, a van and a camper so the T4 is uninsured and up for sale. My idea now to keep costs down is to sleep in the back of my van. I have a mattress, sleeping bag, radio, gas stove, a light  and a portaloo, what more could I possibly want? It was a
bloody freezing night but I was snug and slept well.


My alarm went at 5.30 and after a bit of shuffling around in the cold I managed to get the kettle on, have three mugs of tea, a bread and butter (no toaster as yet) and was I raring to go. On the way down I had told Jeff that snow had been forecast for high ground, his reply to that was that I must be getting mixed up with the highlands of Scotland and that was a common mistake???? Little does he know that after working outside for the best part of 25 years, I am fanatical about the weather and weather forecasts. Highlands my arse. Anyway as he arrived at my van he declared "look!! There's snow up there". Well I never. 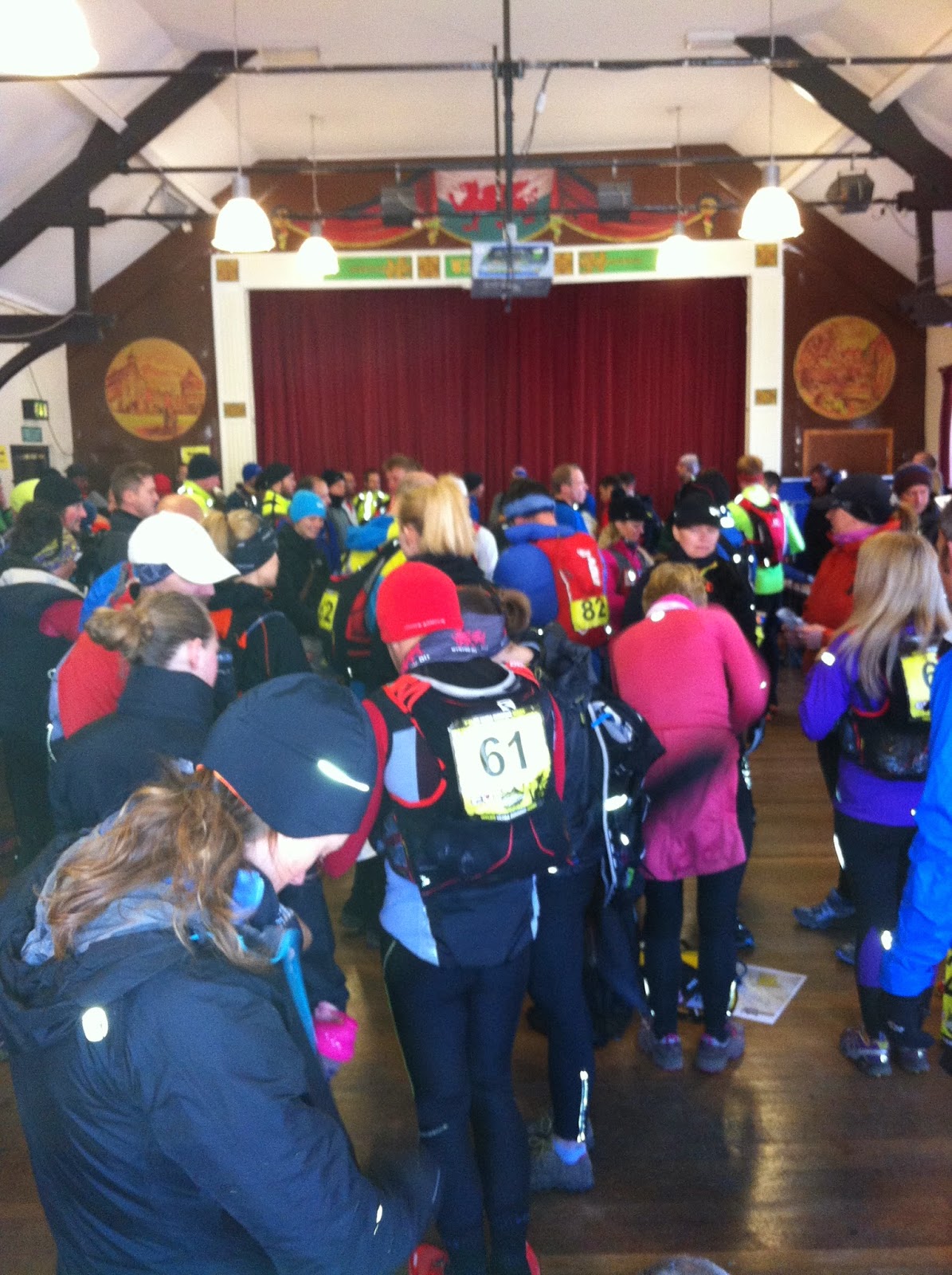 I like to get to reg a good hour before the start so I don't have to queue for anything, the toilet, my number etc and I can then take my time to get ready. I was unsure on what to carry but the mandatory kit is almost identical to UTMBs so I thought it would be a good time to carry all of it. I have been waiting to buy the new Hagloffs gram 12 pack for my Mont blanc foray but my trusty Raidlight pack has served me well for years and  I'm struggling to find fault with the old girl. I may just give her the nod for big event but get the Hagloffs anyway because as Ultra runners that is what we do, buy new kit even if we don't need it. Now I pretty much always wear shorts, whatever the weather I will wear them but it was so cold at reg and during the brief we were warned of blizzards and wind chills of -13 on the high ground it would have been fool hardy not to heed the advice. So my 3/4s were in order with two shirts, buff and gloves. 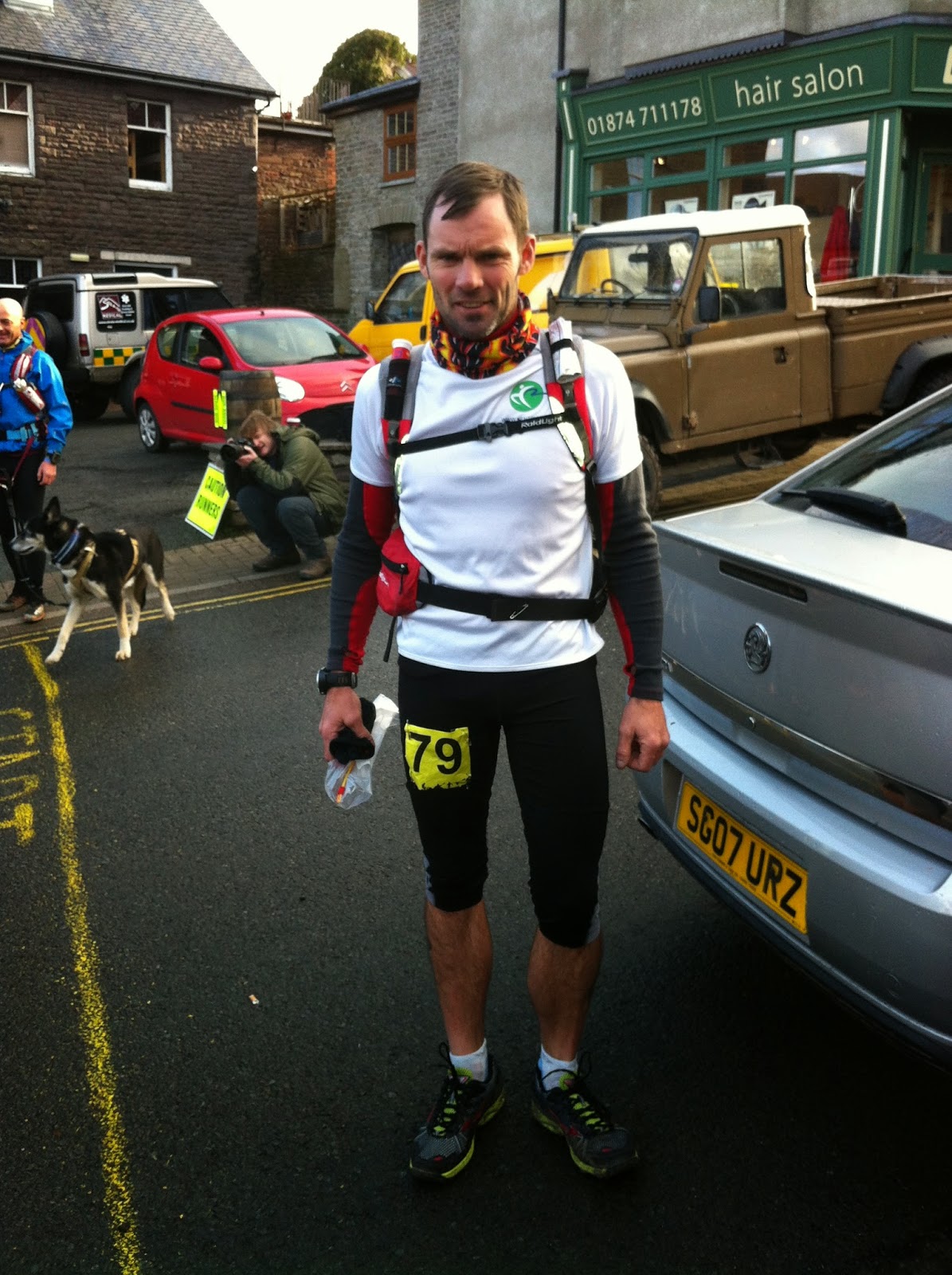 We were warned at the brief that the first six miles were hard so we should take it easy early and build up. You should always worry when the start line is on a steep hill looking up. We were off and I set off at a fair pace. I soon realized that the first six were indeed hard, very hard. We were just going up steadily for those first six. I reached CP1 reasonably quickly and soon after we were going up really steeply and out came my sticks. I have a pair of Black Diamond sticks and am really getting used to them now. They fit into my Raidlight bag perfectly, they are easy to carry, have good comfortable grips are easy to deploy and fold back up, I can't imagine there being many better sticks out there. 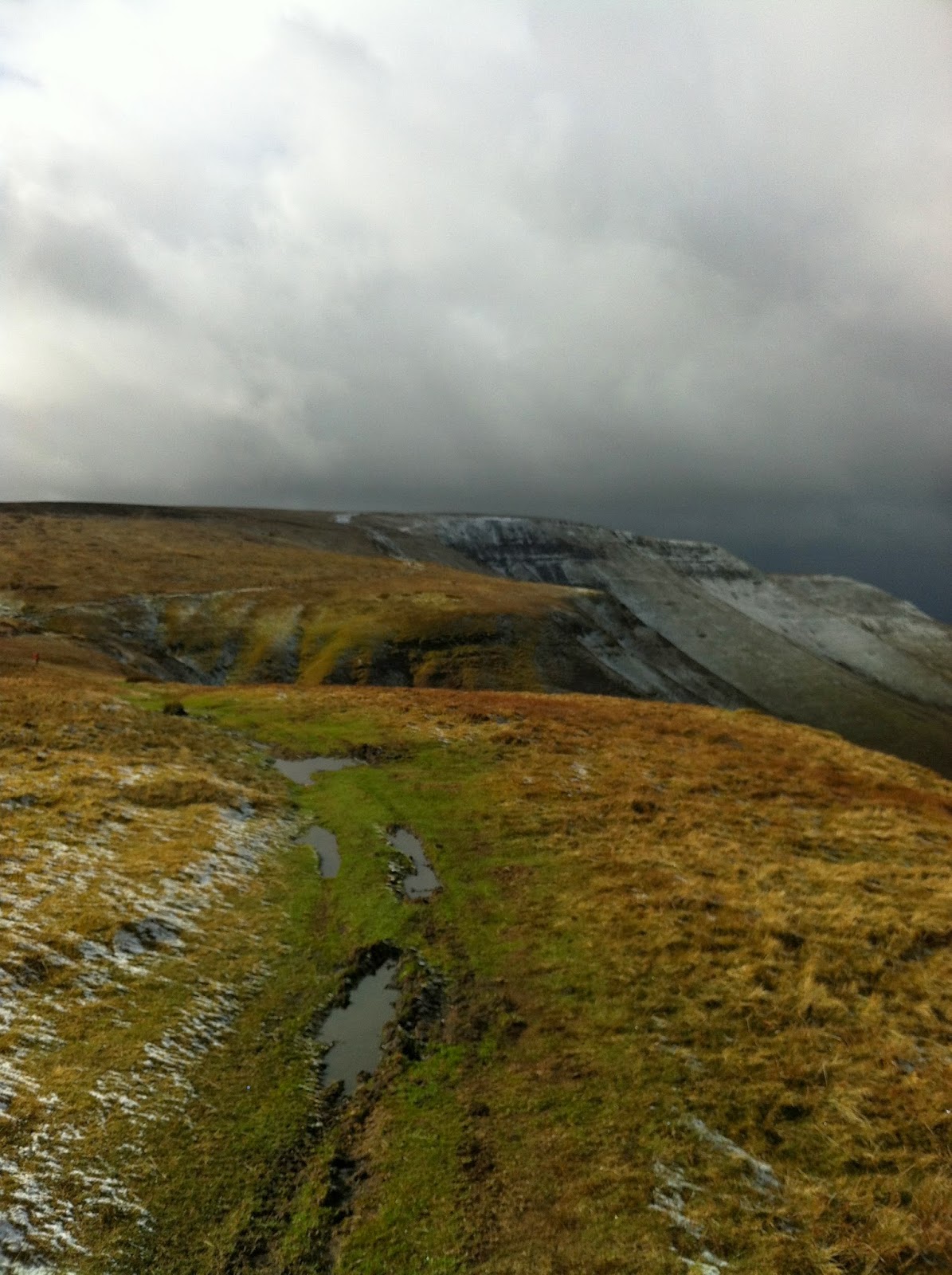 I soon realized though things were not going well I had nothing in the tank. The previous week I had been trying not to eat any processed food and I had stuck to it. No alcohol, no junk, nothing but things were going wrong today. I had to have a gel around 10 miles which saw me right for the next few miles. Somewhere around 16 mile we climbed a steep bank which was probably as steep as you can go up without using your hands. I used my poles and got to the top but it took it right out of me again and I hit a really bad patch at about 18 mile. Although the scenery was drop dead gorgeous it took me a few miles to recover from this one. I left CP5 still a bad way but soon felt better and before long was running along happily again. I reached CP6 feeling rather chipper, filled my bottles and stuffed a few jelly babies. As we ate the CP crew said the next climb was a monster as was the next section, 13 miles to the next CP. 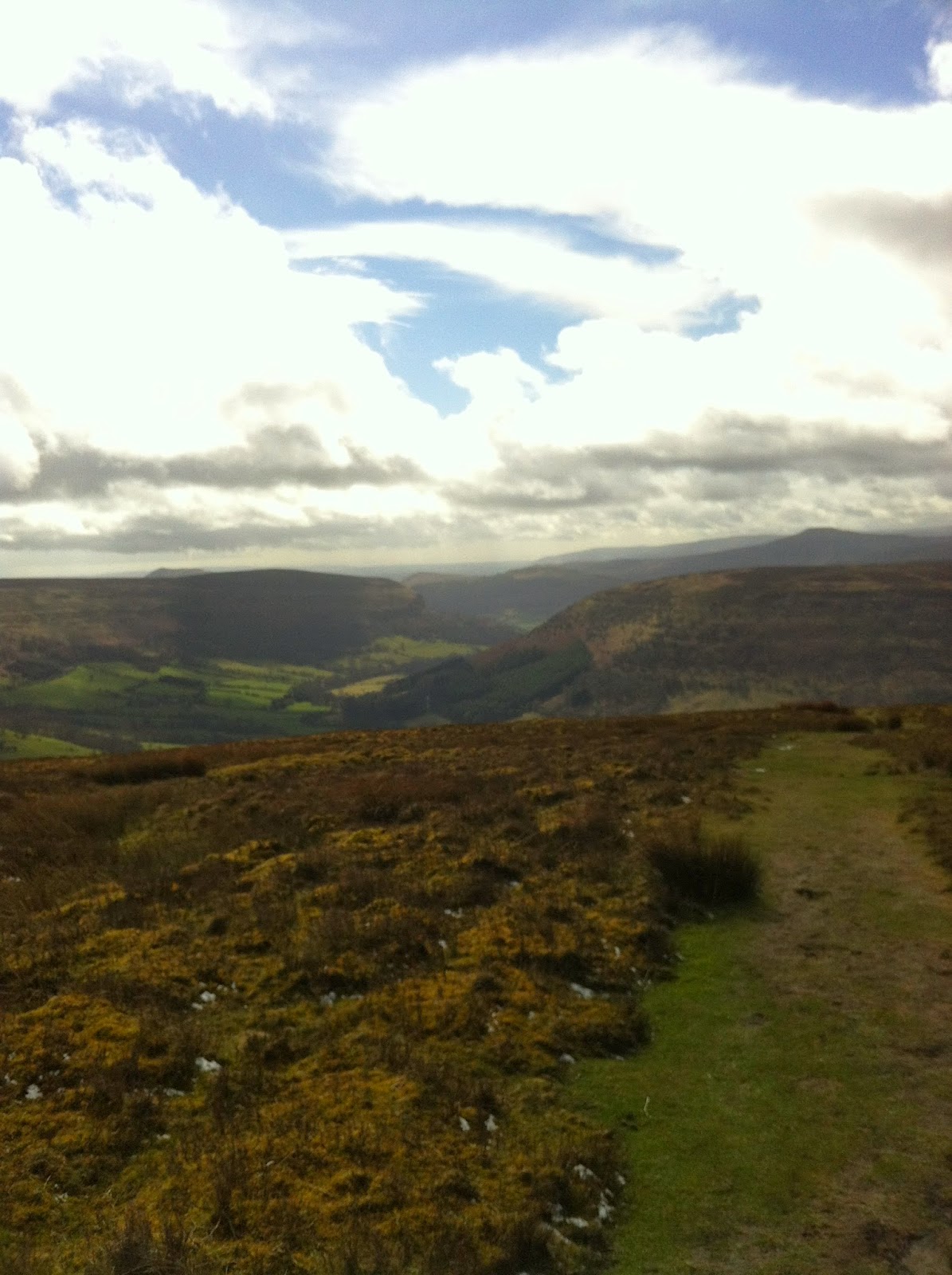 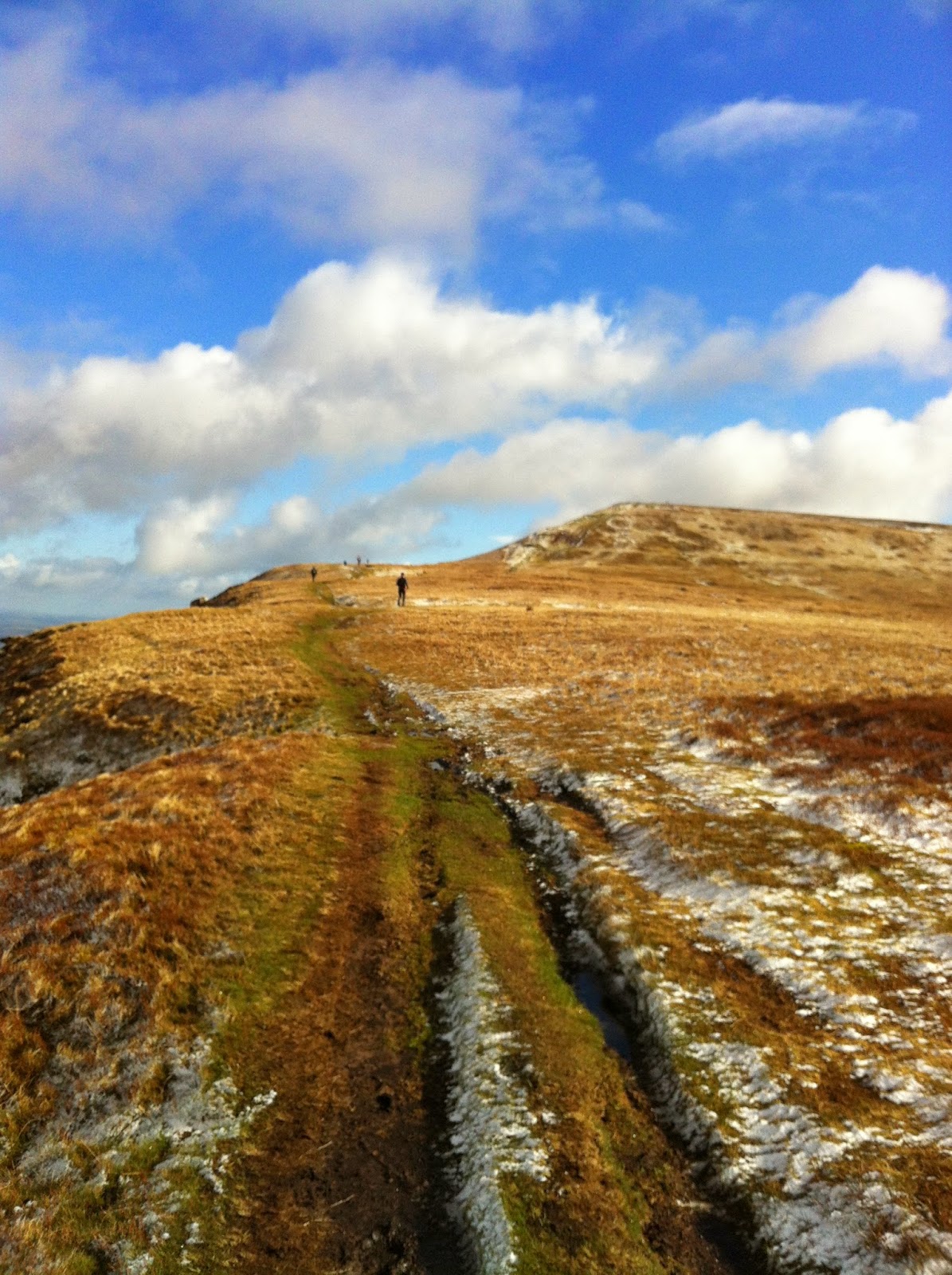 That climb indeed was tough and as we reached the top we could see the weather closing in from the left. We had some sporadic hail storms earlier in the day and they had been rather brutal. Short but brutal. As we ran across the ridge we were having to leap the mud and several times I sunk deep in over my shoes, it was hard going but fun and my new Mizuno Wave Harriers were more than capable of the job. Around the 32 mile mark the wind picked up to gale force and the hail and snow swept in again. This time it was horizontal and hammering in. Three of us ran together as it was hard to see more than five metres ahead. We had to shield our eyes as the hail battered our faces and stung like hell. There was no shelter it didn't matter how tired we were, we ran just to get out of this storm. I have bad circulation in my hands due to years working with vibrating machinery and I really feel the cold in my fingers. This cold was really painful and now it was setting in big time. My gloves were doing little to stop the cold. It seeped into my thumbs then forefingers and before long spread right across my hands. I could now no longer use my hands at all, they were extremely painful and useless, I couldn't even fold my sticks up. I was really worried, for the first time ever I really thought I was in trouble. My only option was to get off this mountain fast, so all my other tiredness issues went by the wayside and I ran like the clappers all the way down to the last CP. As I descended I couldn't even unzip my coat away from my face, I had to put one hand to the zip using the other hand and push my fingers together before I could pull it. I ran into CP7 and couldn't pick up any food so i got the crew to tip various sweets in my hand which i then stuffed into my mouth. As i ran the feeling started to come back slowly and before i knew it the finish was there and i was done. 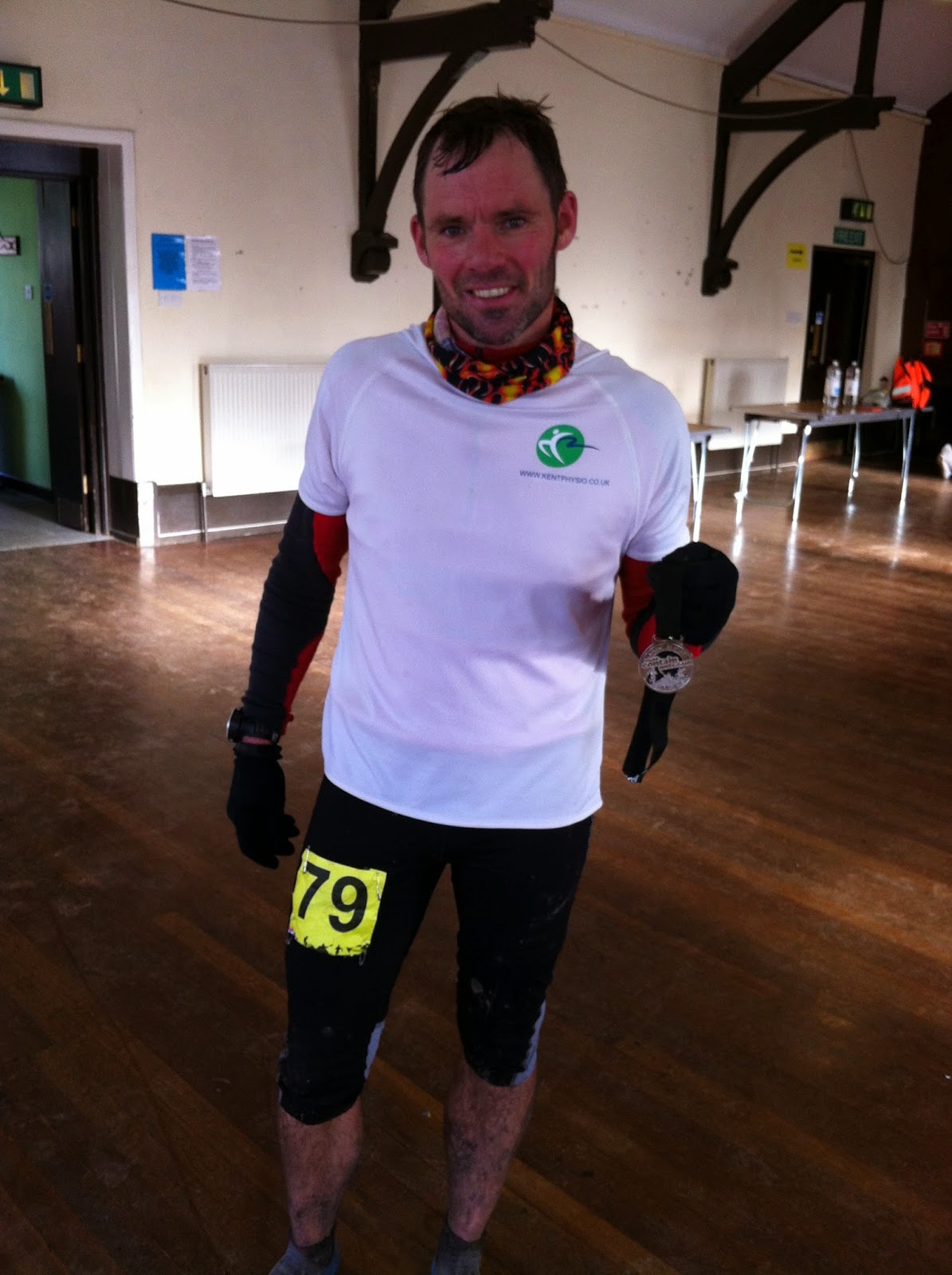 I finished in around 9hrs 2mins which given the terrain I was happy enough with. The race was an education in mountain running and how I must never underestimate the conditions. How it went from a chilly spring afternoon to a full blown storm was shocking and I will certainly keep this in my mind when I arrive in Chamonix later this year. UTMB is definitely going to be a just get round kind of race.


Once again I'd just like to thank http://www.kentphysio.co.uk/ for there ongoing support.